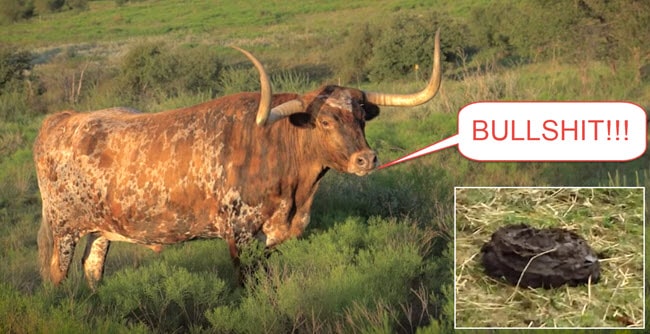 Silver has been participating in Gold’s new Bull Market, but the action hasn’t been very exciting

That all changed on August 7th when Silver opened at $16.44 and closed at $17.07 – this gain of 63 cents launched the next phase of the Silver bull market

It doesn’t matter what financial vehicle you want to talk about, a 3.8% move in one day is significant

And, in Silver’s case, this huge move was a breakout through a long-term support/resistance line dating all the way back to 2010 as we can see in this monthly chart 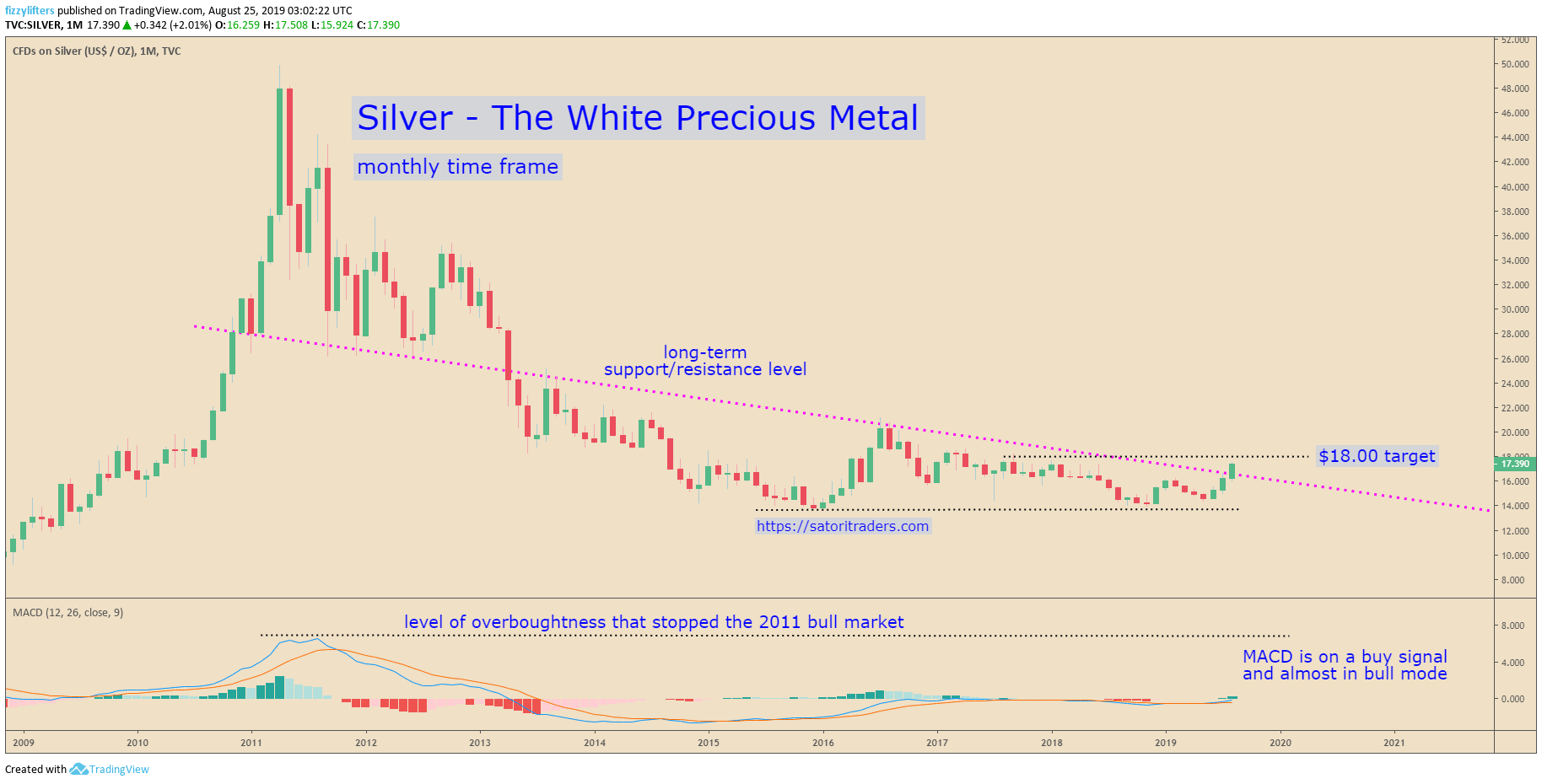 In the monthly time frame the next obvious price target for Silver is the round-number at $18.00

For Silver Bulls, the MACD in this chart is truly exciting

In the current secular Bull Market for precious metals, Silver is going to be sporting at least a three-digit price tag

With its recent big moves, Silver has reached a resistance level identified by the upper-median-line-extension of the Schiff pitchfork

Price may pause here, but with the geopolitical events of the past week the pause may be quite brief 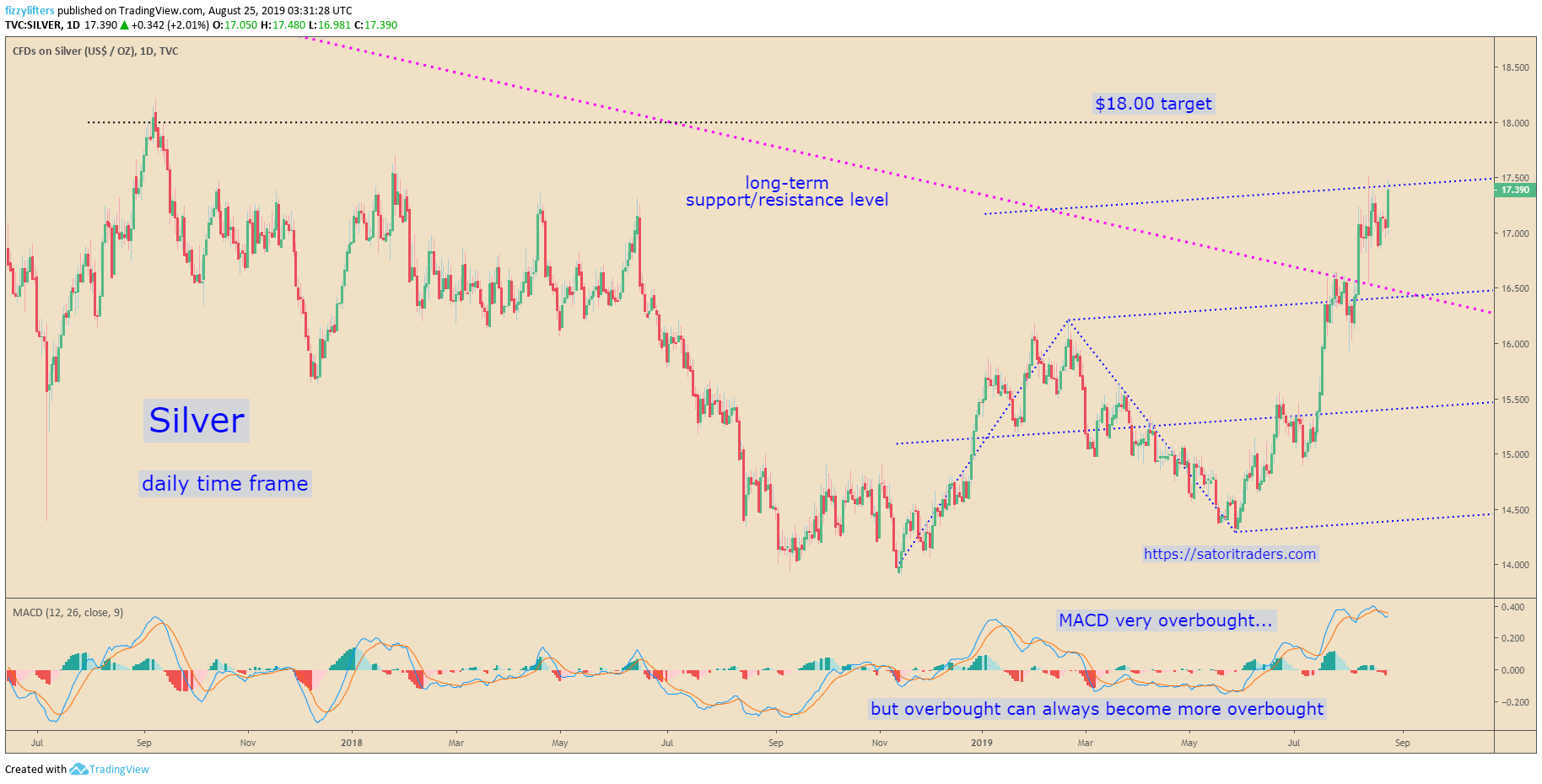 Silver had a big day on Friday, clocking-in with a 34-cent gain

That 2% pole-vault tested resistance for the second time – Silver may need to pause here and catch its breath, but the $18.00 target seems like a given, even if it is just a quick spike up to that level before both Gold and Silver take a much-needed rest 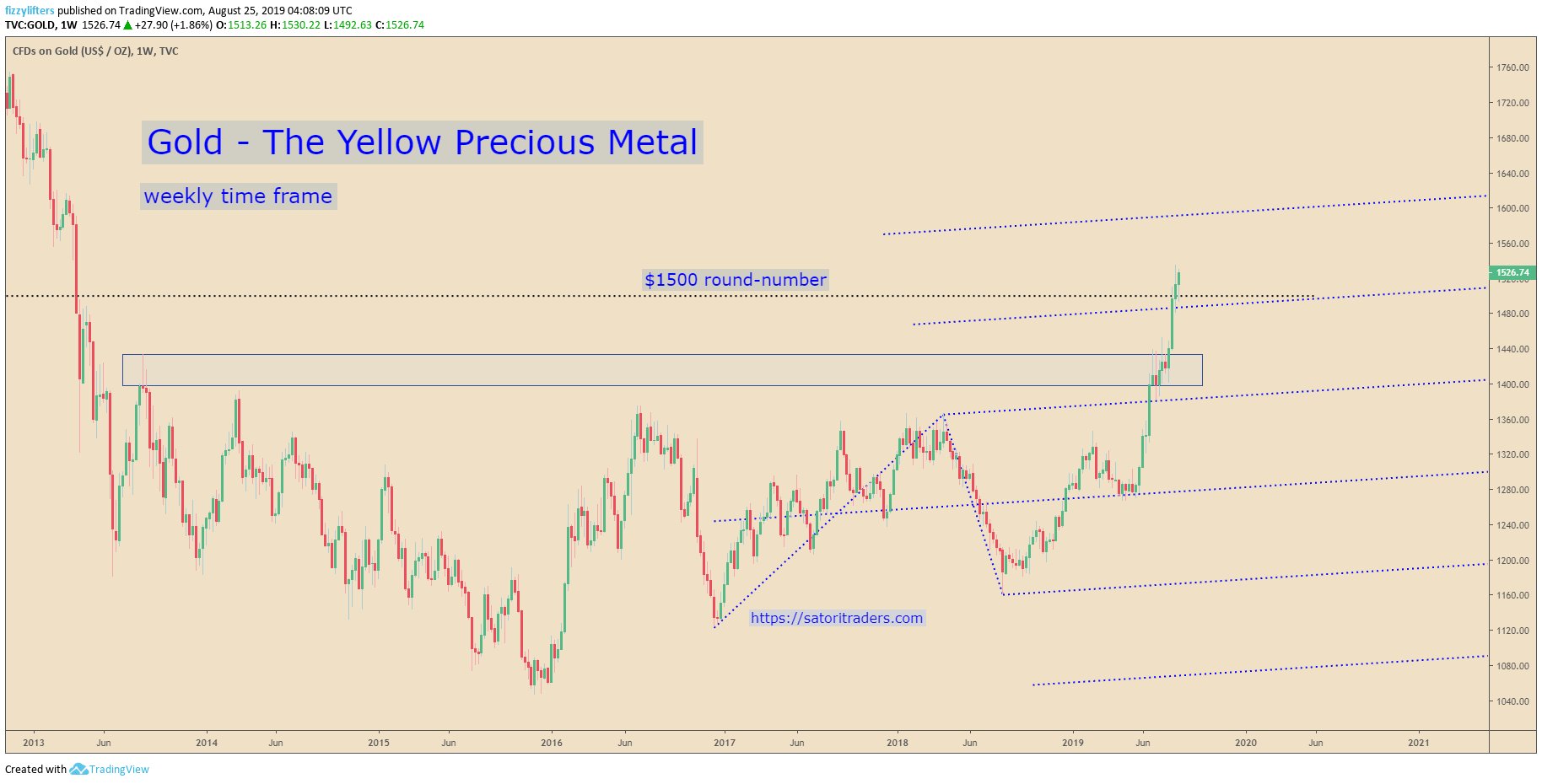 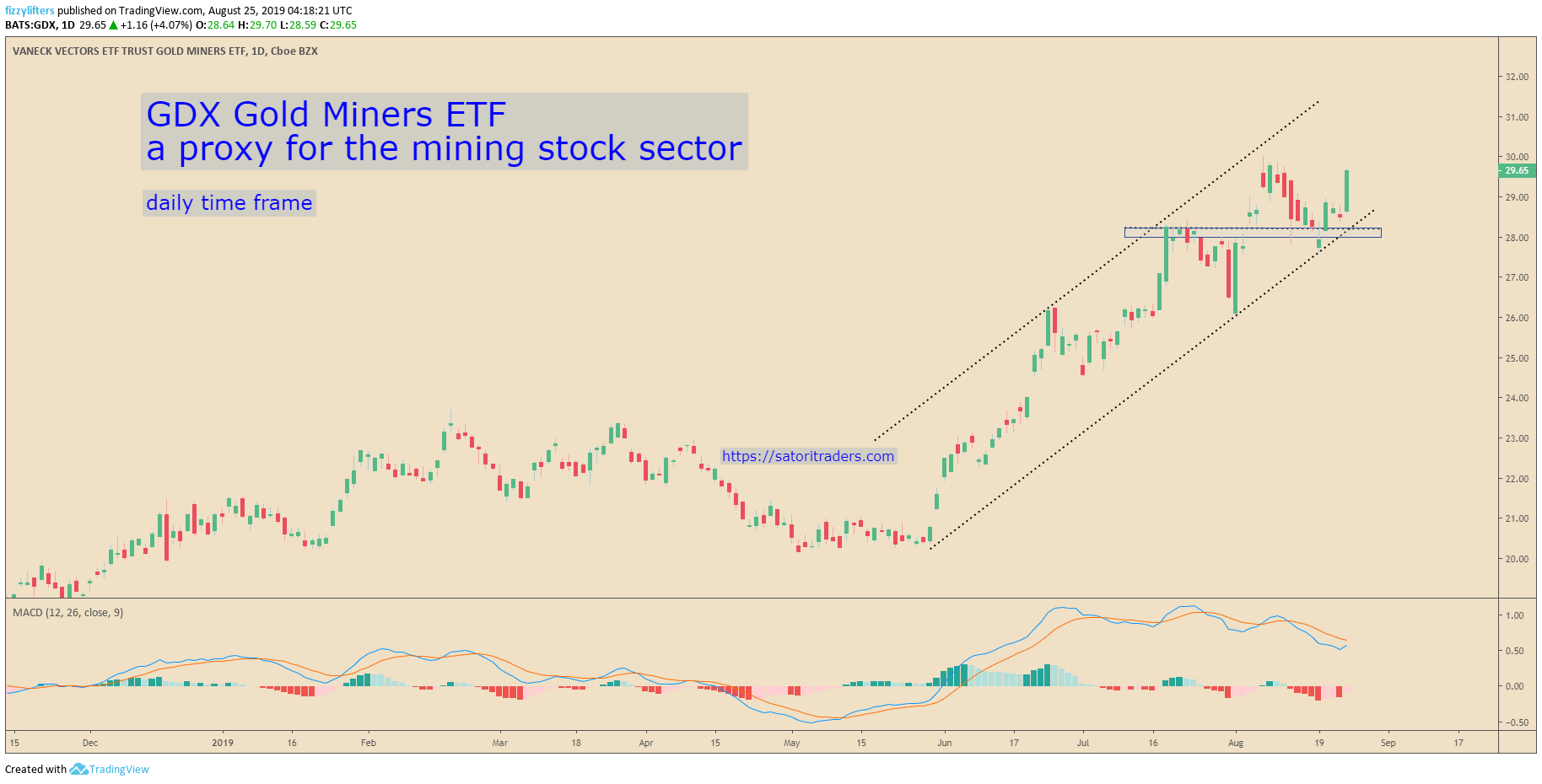 On the one hand, I’d like to see prices continue higher so I don’t take any heat on my new positions

On the other hand, I’d like to have a big correction where I can back up the truck instead of taking small ‘hold your nose and buy’ positions

As we can see in the chart, the bottom of the channel provided support and price gapped-up from that level, demonstrating the strength of the new Bull Market in Silver and Gold

While Silver pole-vaulted 2% higher and Gold surged 1.9% higher, the mining stocks added a full 3.5% to their collective prices

Phase Three of the Gold and Silver Bull Market

During a Bull Market, one of the risks that investors face is that prices tend to make vertical moves to the upside

In the current Bull Market, we have the added factor that the metals have now begun the second upward leg of their secular uptrend which began in 2001 (or 1999 if you prefer)

In Elliott Wave (EW) terms, the metals have begun wave three of a five wave movement

Gold Elliott Wave: 2016 Rally Was A Fly on the Golden Bull’s Butt

In Richard Russell’s terms, Silver and Gold have entered the third and final phase of a tremendous Bull Market that historians will write about for decades to come

According to Richard, the third phase is when widespread acceptance of the 'new' Bull Market occurs, leading to manic behavior on the part of investors and parabolic price action

In either case, we are likely going to bear witness to numerous vertical jumps higher as Silver and Gold seek out their true value in this world where all things financial are currently enumerated in worthless fiat currency

For example, China and Russia could announce one Monday morning that the Yuan and Ruble are now tied to Gold at a price of $5,000 per ounce

Silver would follow Gold higher and, most likely, the Gold-to-Silver ratio would instantly change from its current value of 87 to something in the neighborhood of 60 or even 50 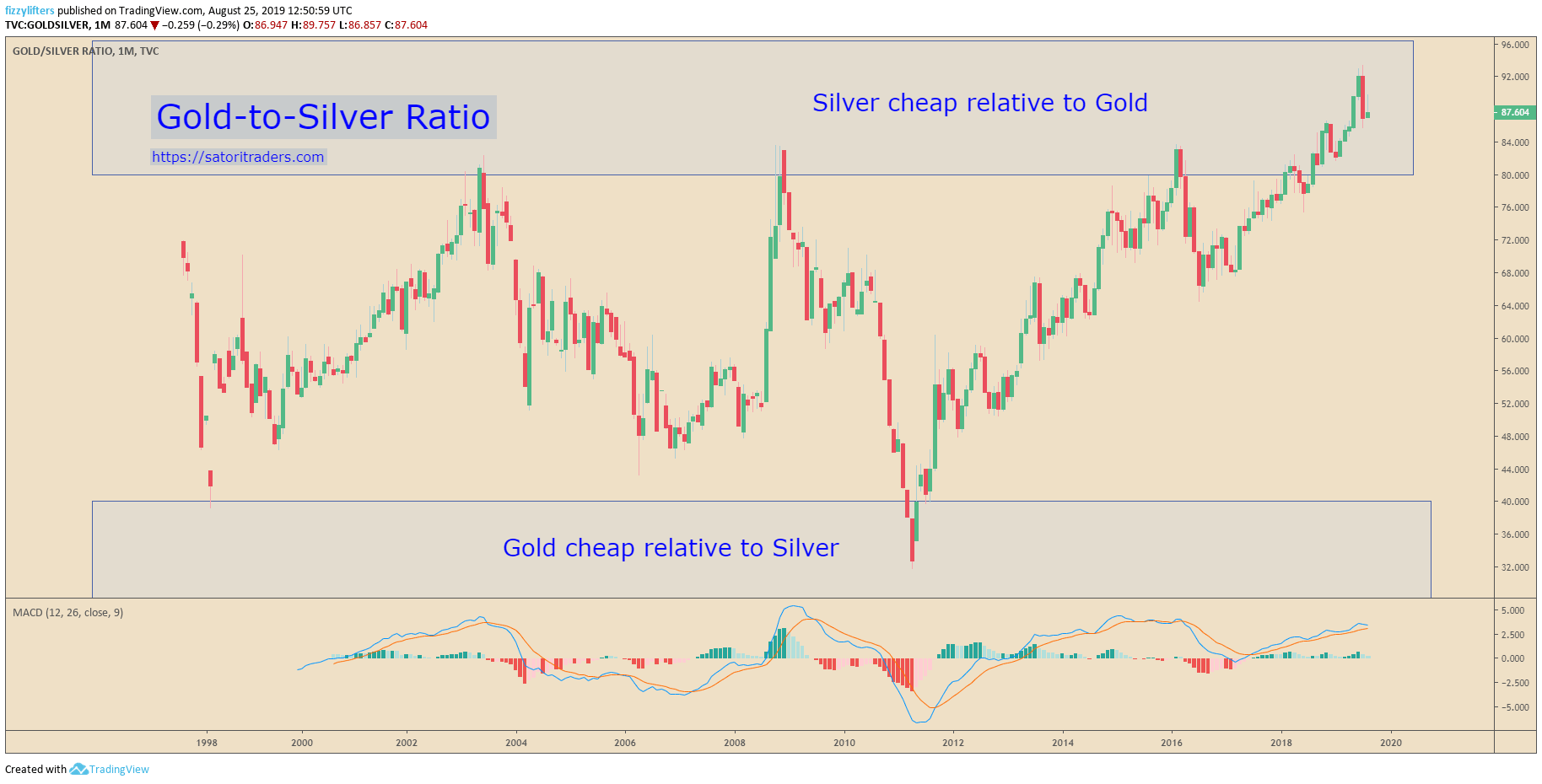 Equities of the precious metals mining companies would explode higher

All of the investors waiting for a conservative entry into the precious metals market would be left on the sidelines warming the bench – hopefully, you won’t be one of them

I tell ya’ folks, it ain’t easy being a Texan sometimes

This Texas heritage makes it easy for us to spot the brown smelly stuff, and it is being spread especially thick right now by both politicians and central bankers

Of all the remarkable events of the past week, the most remarkable IMO is having England’s chief central banker, Mark Carney, calling for a new global currency at the Jackson Hole Symposium (did I mention an economic reset?)

Acknowledging that the US Dollar and all of the other 180 fiat currencies on planet Earth are doomed is actually a sign of intelligence (or honesty) on Mr. Carney’s part

At best, it would allow the central bankers and politicians to maintain the status quo for a little while longer

And in case there is any doubt, the status quo that they are desperate to maintain involves financially screwing-over 99% of the planet’s population in order to enrich the other 1%

And if that isn’t bullshit, I better hang up my spurs

I don’t have a short temper, I just have a quick reaction to bullshit.

Have a fantastic week, folks – these are definitely interesting times, position yourself accordingly for the Gold and Silver bull market