Gold Elliott Wave: 2016 Rally Was A Fly on the Golden Bull’s Butt 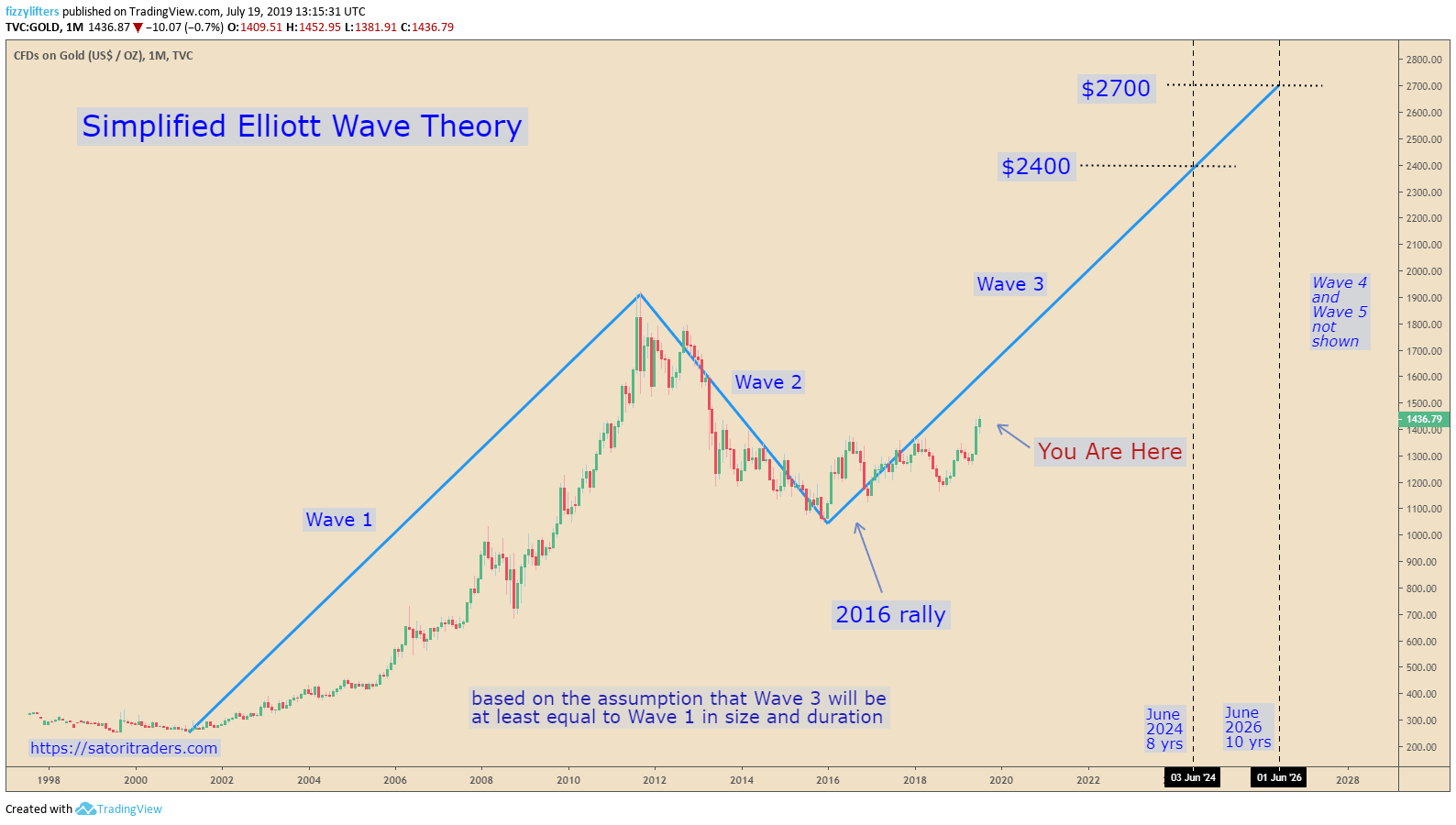 My reaction, I believe, occurred because the descriptive moniker “mini” was being used without any context

"Mini" compared to what?

Keep in mind that Richard witnessed the 2001-to-2011 Golden Bull and was adamant in his newsletters after 2011 that the third and most dramatic phase of Gold's bull market was still in the future - i.e., 2001-to-2011 was NOT the end of the secular bull market that Richard expected in Gold

Richard also pointed out that price, in the third phase of a bull market, often rises to levels that surprise even the staunchest of bulls

Clearly the 2016 rally does not meet Richard's description of a third phase bull market, so referring to it as "mini" is appropriate in that context

If we look at the 2016 rally in isolation, it is easy to say, "Holy Etruscan Snoods, Batman! That was one heck of a rally!"

When we back up and intentionally search for the 10,000-foot view, however, we find that the 2016 rally wasn't all that impressive

In contrast, look at how Gold is now powering higher and pushing through every resistance level fairly quickly - we're not even getting pullbacks, just brief pauses while the Bull catches his breath

The "Big Bull" has been unleashed and he's on a run!

I am not an Elliott Wave (EW) practitioner, but I find value in these general EW concepts:

After looking at thousands of charts and hundreds of different financial instruments in multiple time frames, I have regularly seen these patterns in play

Now sometimes the 5-wave pattern turns into 7 or 9 waves, but who cares?

As traders, all we need to know is that after wave 5 completes, the probability of price reversing direction increases

The general concept of 5-waves and 3-waves is useful, and we can benefit from applying the concept without getting bogged-down in the weeds worrying about minuette wave iii of sub-wave 4 that truncated because it was part of a larger complex corrective pattern...

In strict EW terms, what I am calling waves 6-through-9 are probably part of some complex corrective pattern, but that is more detail than I care to know about EW

Gold Elliott Wave - You Are Here

IMO the 2001-to-2011 rally was the first upward wave of the multi-decade, secular bull market that Richard Russell referred to – let’s call that Wave 1

Bull markets are followed by Bear markets and that's just what happened to Gold from 2011 to late-2015 - this multi-year Bear market represents the second wave, Wave 2, of my expected 5-wave pattern

Since Wave 2 ended in late-2015, it must be Wave 3 that is currently unfolding

And let’s remember that we are talking about Wave 3 in the context of Wave 1 which lasted 10 years, and Wave 2 which lasted 4 years

Wave 3 should be at least as big as Wave 1 in terms of price gain, and it is likely to be similar in duration, if not longer

How do the three bull market phases align with the 5-wave EW pattern?

If we dig a little deeper into EW we find that either Wave 3 or Wave 5 is likely to elongate – in commodities, probability favors Wave 5 as the long leg

That suggests that once Wave 3 completes and we have another multi-year Bear Market (Wave 4), Gold will then probe skyward in Wave 5 towards some number that seems ludicrous right now

In my modeling, I am going to assume that the peak of EW Wave 5 and the denouement of Richard’s three-phase bull market will occur together

* denouement: the final part of a play, movie or narrative

Within each of the 5 waves I have been referring to, we could zoom in and find smaller-scale patterns of 5 and 3 waves

In my simplified Gold Elliott Wave model, I am counting the 2016 rally as the first wave of a 5-wave movement that will ultimately form Wave 3 of the "Big Bull"

Take a time-trip back to late-1987 just after Black Monday – imagine trying to convince your brother-in-law that the Dow, trading just above 1600, would be approaching 10,000 in less than 10 years