There is a new Gold Bull Market in progress.

You may have realized that already, or perhaps you’re still doing research trying to determine whether it is true or not.

In either case, let’s take a look at what the yellow metal is up to right now here on planet Earth. 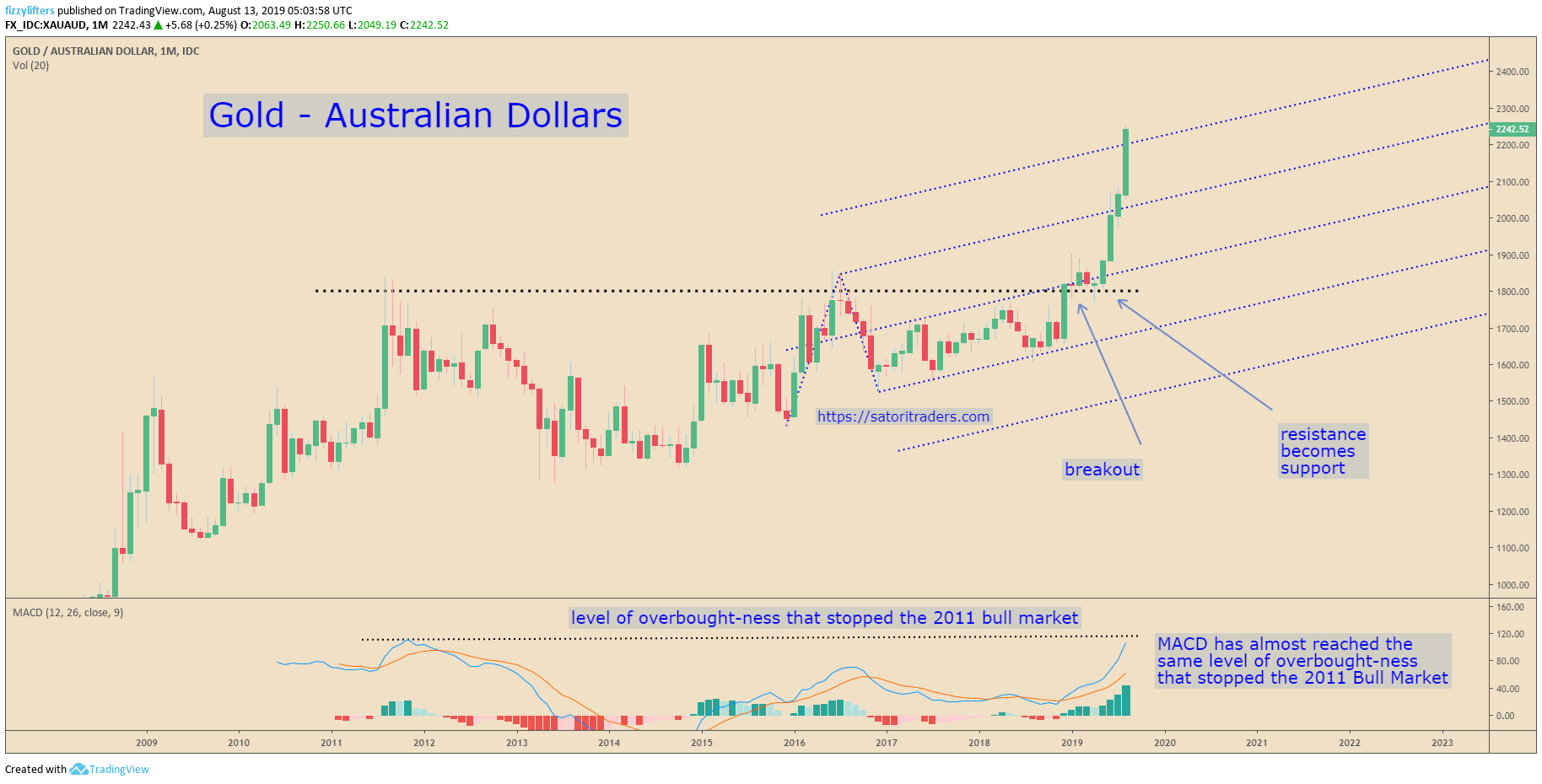 MACD has almost reached the level of overbought-ness that marked the end of the 2001-2011 Gold bull market - perhaps price will take a well-deserved rest soon - remember, however, that overbought can always become more overbought

As fiat currencies are intentionally devalued, real money (Gold and Silver) climbs higher - the relationship is not hard to understand 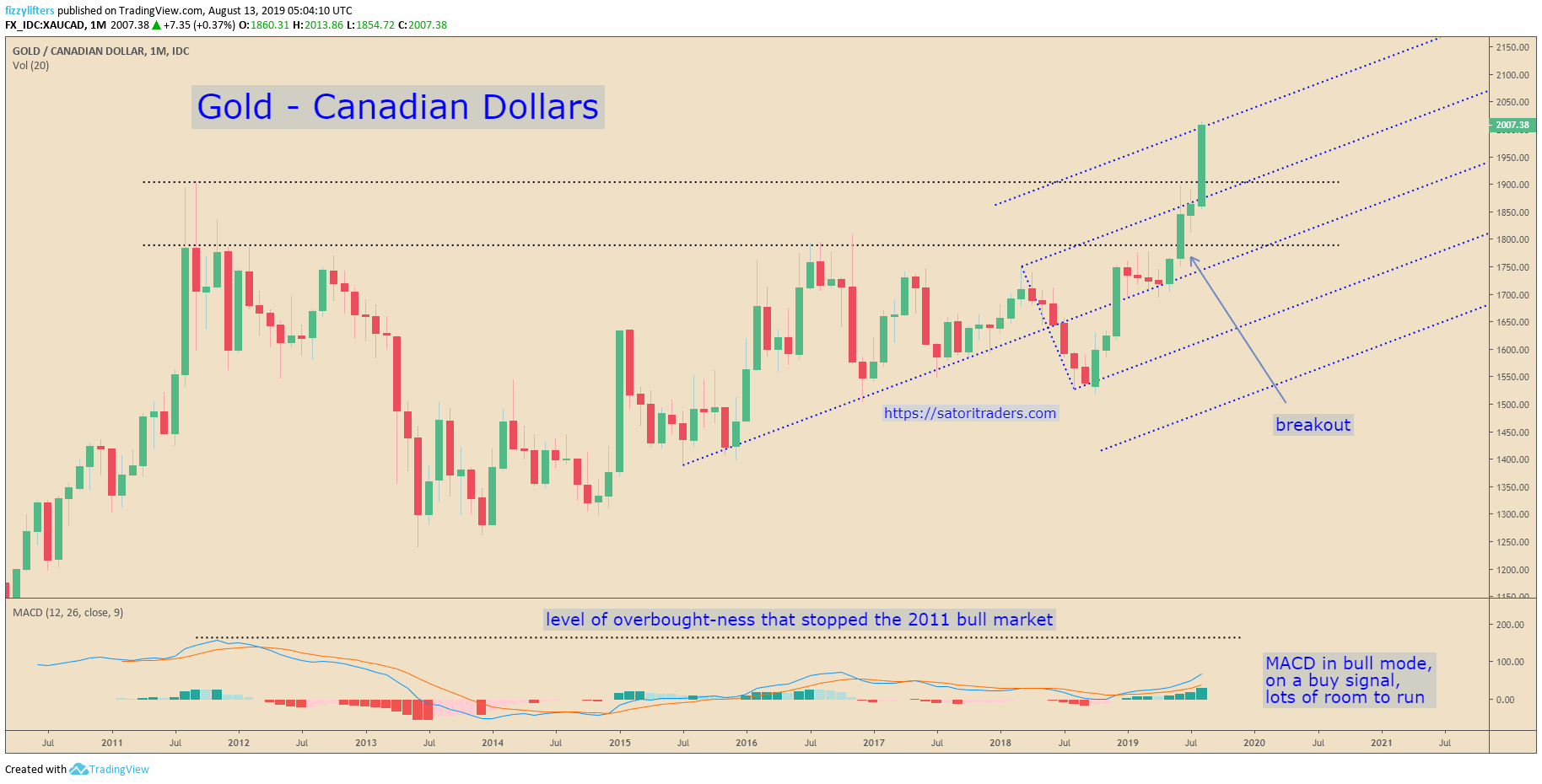 Notice that Canada, like Australia, is a major producer of Gold and yet the price of Gold in Canadian dollars is nowhere near as overbought as it is in Australian dollars - what's the difference? - Canada hasn't intentionally devalued their currency (yet) 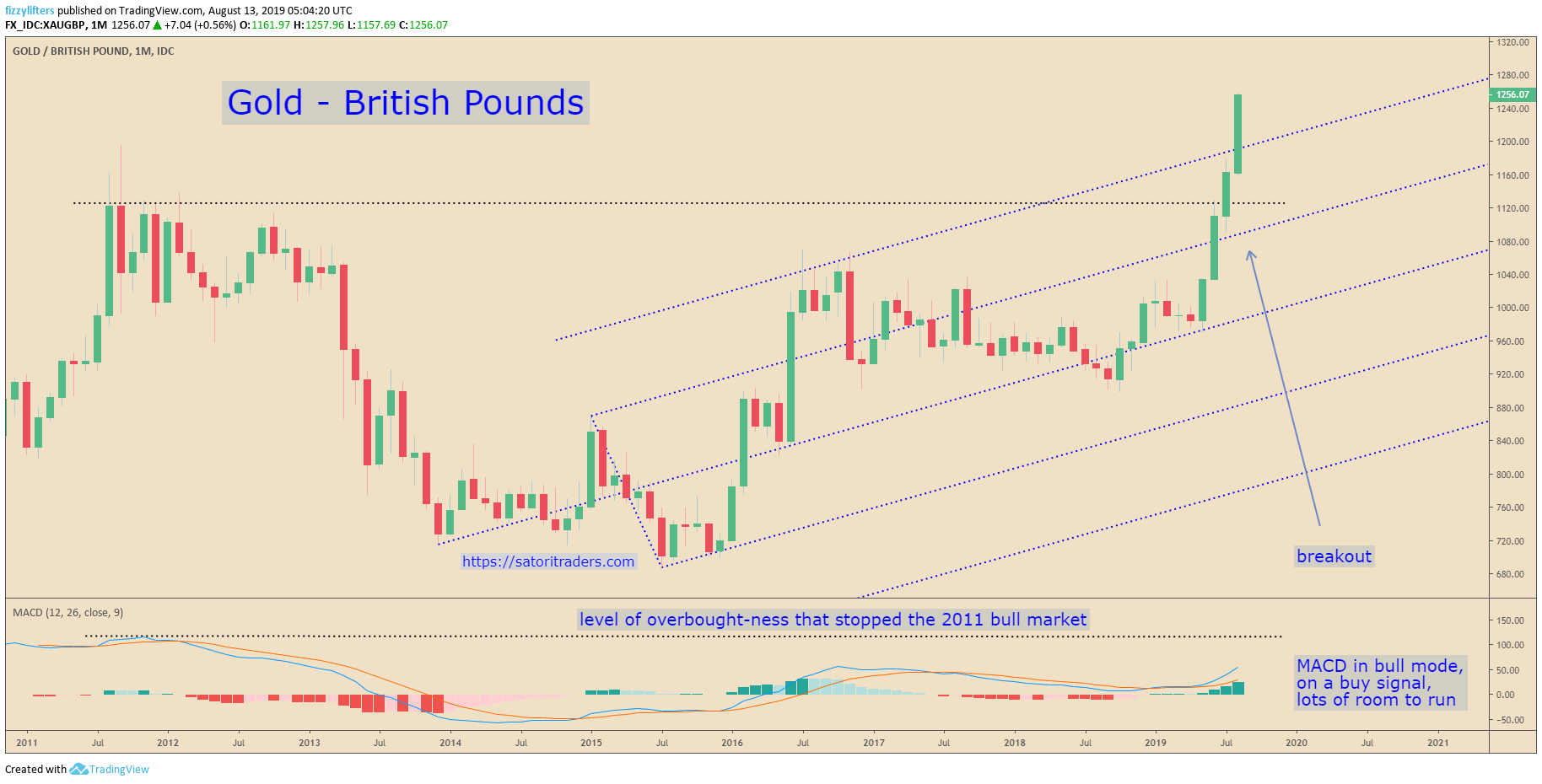 The price of Gold in British Pounds continues powering higher

The EU government is a group of unelected elitists who decided that Europe needed a centralized government and proceeded to create one - hopefully Brexit, Frexit, and Italeave will be the final nails in the EU coffin 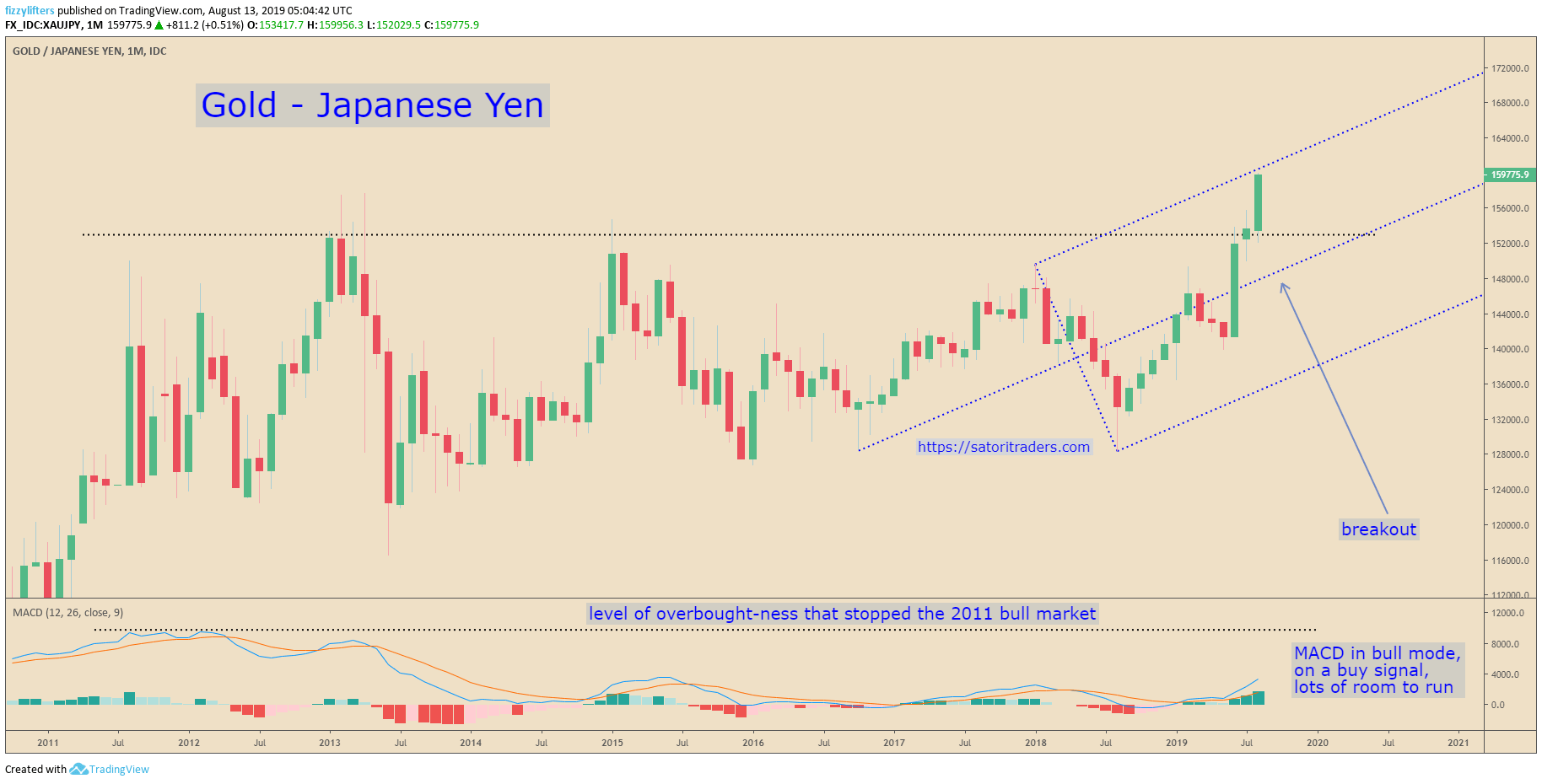 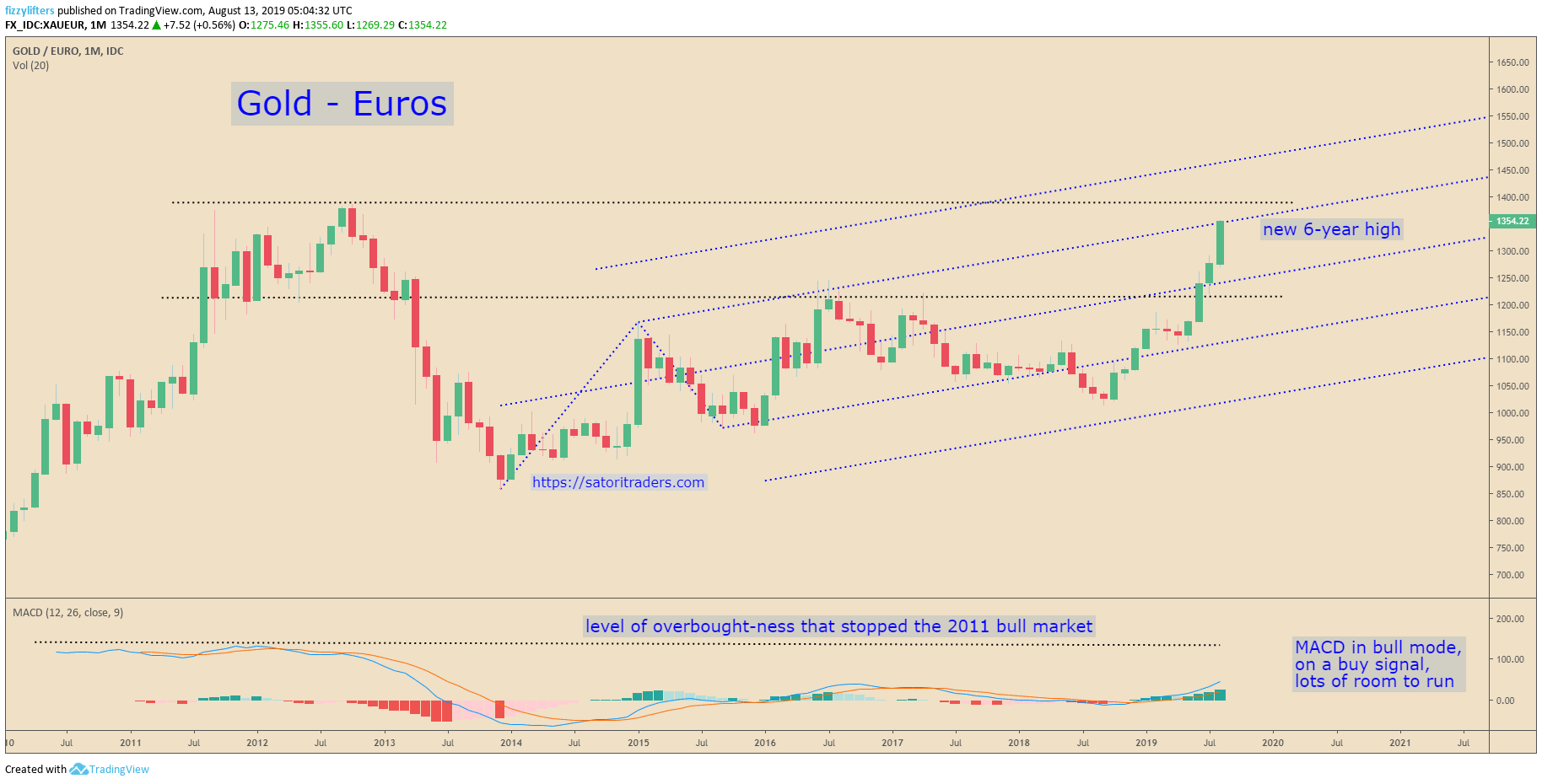 Price of Gold in US Dollars Today (monthly) 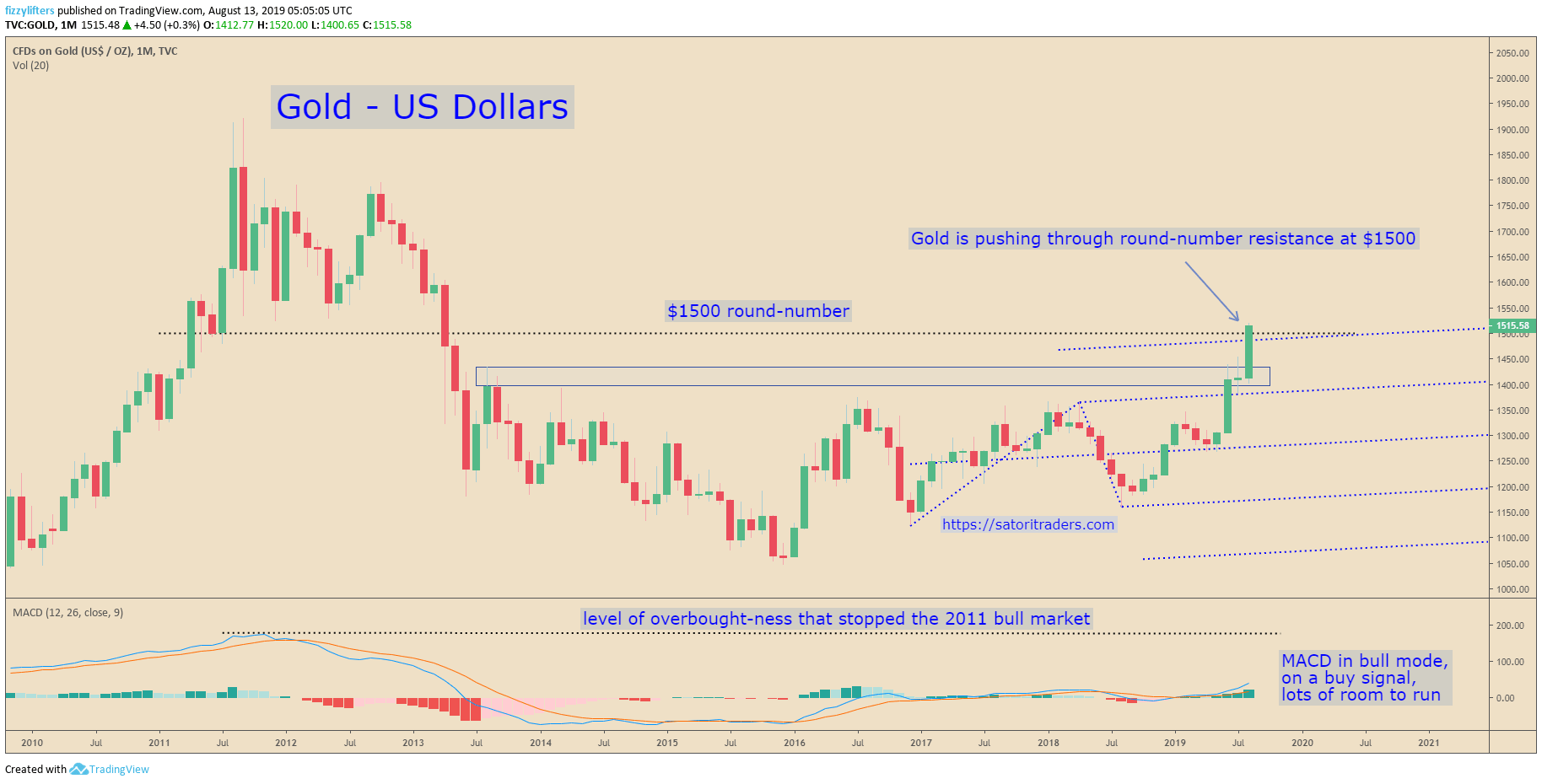 It’s obvious that Gold has done well in the last year.

Are there any reasons we should expect this emerging Gold Bull Market to continue?

Let’s list some of the factors that might provide fuel for Gold’s upward trend (in no particular order):

“The trouble with Socialism is that eventually you run out of other people’s money.”

We could continue with the list above, but perhaps it would be more productive to step back and look for dominant themes instead of trying to itemize all of the drivers for a continuing Gold Bull Market.

Now I tell ya’ folks, it makes me somewhat uncomfortable writing this week’s missive.

I strongly dislike “gloom and doom” content that intentionally plays on people’s fears, and yet that’s what the lists above remind me of.

Unfortunately, however, those lists are a pretty good summary of what I believe is currently happening in the world.

Could I be wrong? Absolutely!

And I hope I am – the resolution of the issues and themes I have cited (assuming they are accurate) will not be pretty.

First of all, a caveat.

I am not a financial planner or advisor. I don’t have any formal education in economics, and I don’t hold any licenses related to monetary or financial matters. I’m just an engineer trying to make sense of the world around me.

With that said, I’ll share with you some of what I am doing personally to take advantage of the current Silver and Gold bull market.

First of all, I don’t hold any stocks that aren’t related to the precious metals, Silver and Gold. The current “bull market” (“bullshit market” is a better descriptor) in stocks that aren’t precious-metals-related is driven by a very small handful of companies that just happen to have significant weighting in the headline indexes (Dow, SP 500, Nasdaq). For a more accurate picture of the overall equity markets look at the NYSE Composite index (NYSE: NYA).

Second, I have moved most of my liquid capital into physical Silver and Gold with a heavy weighting (no pun intended) towards Silver. I vault metals at facilities like the Perth Mint in Australia.

Finally, I have designated a portion of my capital as “speculative” and I am using that money to purchase selected shares of the best Silver and Gold mining companies. As with my physical holdings, I am significantly overweighting Silver.

Does This Strategy Make Sense?

Every individual has to answer that question for themselves.

Again, I am not a financial advisor and I don’t play one on TV. What anyone does with their own money is a personal decision and each of us is responsible for the financial choices we make.

The precious metals provide financial protection in case any of the world-altering outcomes listed above come to pass.

They also offer the potential for dramatic wealth increase as this secular Silver and Gold bull market runs its course.

Please seek guidance from a qualified and licensed financial advisor before making any changes in your personal situation.